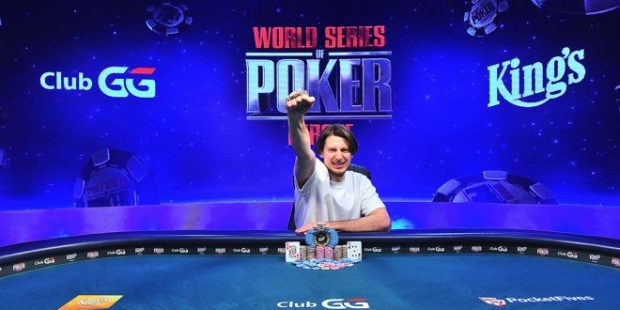 Ukraine’s Andriy Lyubovetskiy won Event #10: €25,000 Platinum High Roller of the ongoing 2021 WSOP Europe at King’s Resort in Rozvadov, claiming his first WSOP gold bracelet and € 518,430 in prizemoney. He came out on top of a strong field of 72 entrants, including Finland’s Joni Jouhkimainen (runner-up for € 320,415) in the heads-up play. Unfortunately for Jouhkimainen, he was denied the heads-up for the second time at the ongoing series in less than a week. He lost his first heads-up at the series in Event #7: €5,000 Pot-Limit Omaha where he banked €126,091 after losing the title to Denmark’s Maximilian Klostermeier, who had taken home €204,010 for shipping the tournament.

“At this moment, I don’t think I’ve realized what’s going on and what’s just happened. But I can tell you that I’ve been pursuing this dream for the whole 12 years that I’ve been playing poker. Unfortunately, I couldn’t go to Vegas because of visa problems, but it’s my second WSOP final table at the WSOP Europe.”- said the highly elated Lyubovetskiy after taking down his career-first bracelet.

“I think I played my best poker ever. I’m pretty happy and just have no words right now,” he added.

The final day of the event started with 8 players in contention. It was a perfect start to the day for the start-of-day short stack Lyubovetskiy, who doubled in only the second hand of the day to move ahead of several other short stacks, including Thomer Pidun who was the first casualty and was busted in 8th place by none other than Lyubovetskiy. The next player to fall was Ole Schemion who exited in 7th place. Lyubovetskiy’s big move up the leaderboard came up with the elimination of Didier Rabl (6th).

Lyubovetskiy continued on his elimination spree and knocked out Jordan Westmorland whose pocket kings were cracked by Lyubovetskiy’s 7c 5c. He continued his domination and eliminated the two-time bracelet winner Martin Kabrhel in 4th place, extending his chip lead even further. Kabrhel held the K-9 that actually lost to Lyubovetskiy’s A-7, which improved to trip Aces on the  Ac Jd 3d 4d Ad board.

With the elimination of Tom-Aksel Bedell at the hand of Jouhkimainen, it came down to the heads-up play where Lyubovetskiy (22,700,000) held a massive lead over Jouhkimainen (13,300,000). While the heads-up lasted for over two hours and saw the chip lead getting exchanged several times, it was Lyubovetskiy who ultimately prevailed, denying Jouhkimainen the second heads-up at the series.

On the final hand, Jouhkimainen shoved his Qc 5h for 4.65 Million chips, and Lyubovetskiy called with Kh 5s. The board ran out 9d 2s 3h 6s 6d and Lyubovetskiy locked up the pot as well as the title, winning €518,430.