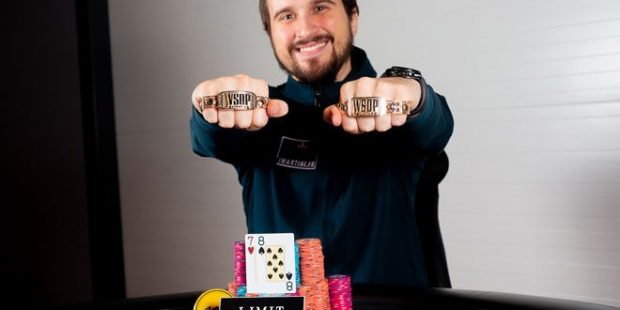 France’s Julien Martini seems to be unstoppable! Less than three days after winning the Event #8: €2,500 Short Deck, the French player won the WSOPE 2021 Event #12: €2,000 8-Game on December 2 to earn his third career bracelet, becoming the first French player to win three bracelets. With the win, he surpassed Bertrand “ElkY” Grospellier and Roger Hairabedian, both two-time champions.

The final day began with 10 players in contention and Schemion in the lead. Artan Dedusha scored the first two eliminations, knocking out Borja Gross (10th for €3,158) and Roland Israelashvili (9th for €3,672). Four-time bracelet winner Max Pescatori (8th for €3,672) was the next player to fall.

Up next, it was Schemion who secured the next two eliminations, busting Grzegorz Wyraz (7th for €4,450) and Artan Dedusha (6th for €5,620) to narrow the field down to the five players.

Symeon Alexandridis’ run ended when his A-2 ran into the A-10 of Nicolas Bokowski while playing no-limit hold’em. Neither player improved and Alexandridis was busted in 5th place for €7,390). Following him was Mikkel Plum who was eliminated in 4th place for €10,085 by Ole Schemion.

The next to fall was Nicolas Bokowski who was eliminated by the eventual champ Martini. In an attempt to double-up, Bokowski had run a set of aces into Martini’s rivered flush in Pot-Limit Omaha.

Martini started the heads-up with over a 3.5:1 chip lead over Schemion. He extended his lead even further before the final hand arose. On the final hand, all the chips got in preflop with Schemion holding Kc 2s against the 8s 7h of Martini. The board ran out 10h 8h 5s 10c 6c, giving Martini tens and eights to secure the pot as well as the title. Schemion was awarded €20,960 as the runner-up.